The Naga project emerged from the many stories of the Naga tribes recounted by the photographer’s father, Richard Bartholomew, who fled persecution by the invading Japanese forces in his native Burma [present day Myanmar] to enter India. Along the escape route, he encountered the Nagas and carried the stories of their hospitality and kindness into his new life in India. This planted a seed of great curiosity in his son’s mind and in 1989, Pablo Bartholomew set out to the lands afar, in his customized 4 wheeler, to explore the geography and its people.

Photographing Naga tribes for over ten years despite the dangers posed by low-level warfare between the Indian army and secessionist groups, Bartholomew drove through the Naga areas of Assam, Arunachal Pradesh, Manipur, and Nagaland, in his rugged jeep that performed several functions beyond being just a vehicle–portable photo studio, carrier of lighting equipment and a generator. Bartholomew describes his multiple trips as “an escape… where phones didn’t work, there were no faxes, just hill tribes and people from the valleys” and termed his project a visual anthropological project.

Nagas is a term used to describe the over-thirty tribes that live along the Patkai mountain range which spills over several geographical boundaries. They are a proud people who continue to hold their own constitution, flag and identity. Within that Naga identity are several diverse indigenous tribes that have over sixty spoken dialects. This essentially brings several cultures together, similar in traits but each tribe distinct; so much so that every tribe could virtually be a nation unto itself.

Several traditions–past and present–are unique to the Naga people. One of them is the tradition of Headhunting which, though banned by the British, symbolised a certain martial power and virility, and continues to stand central to all Naga tribes. Similarly, many animistic traditions of the Nagas are intrinsic to the ways of being and are thus, essential to what makes them a proud people.

In the 1800’s Baptist missionaries penetrated these tribal lands, eventually converting the population to Christianity. Through the past 150 years, an interesting confluence has emerged that is embedded in modernity and also, in traditions making this project a robust exploration and a curious re-visitation of the Naga People and their lands from 1989 to 1999. 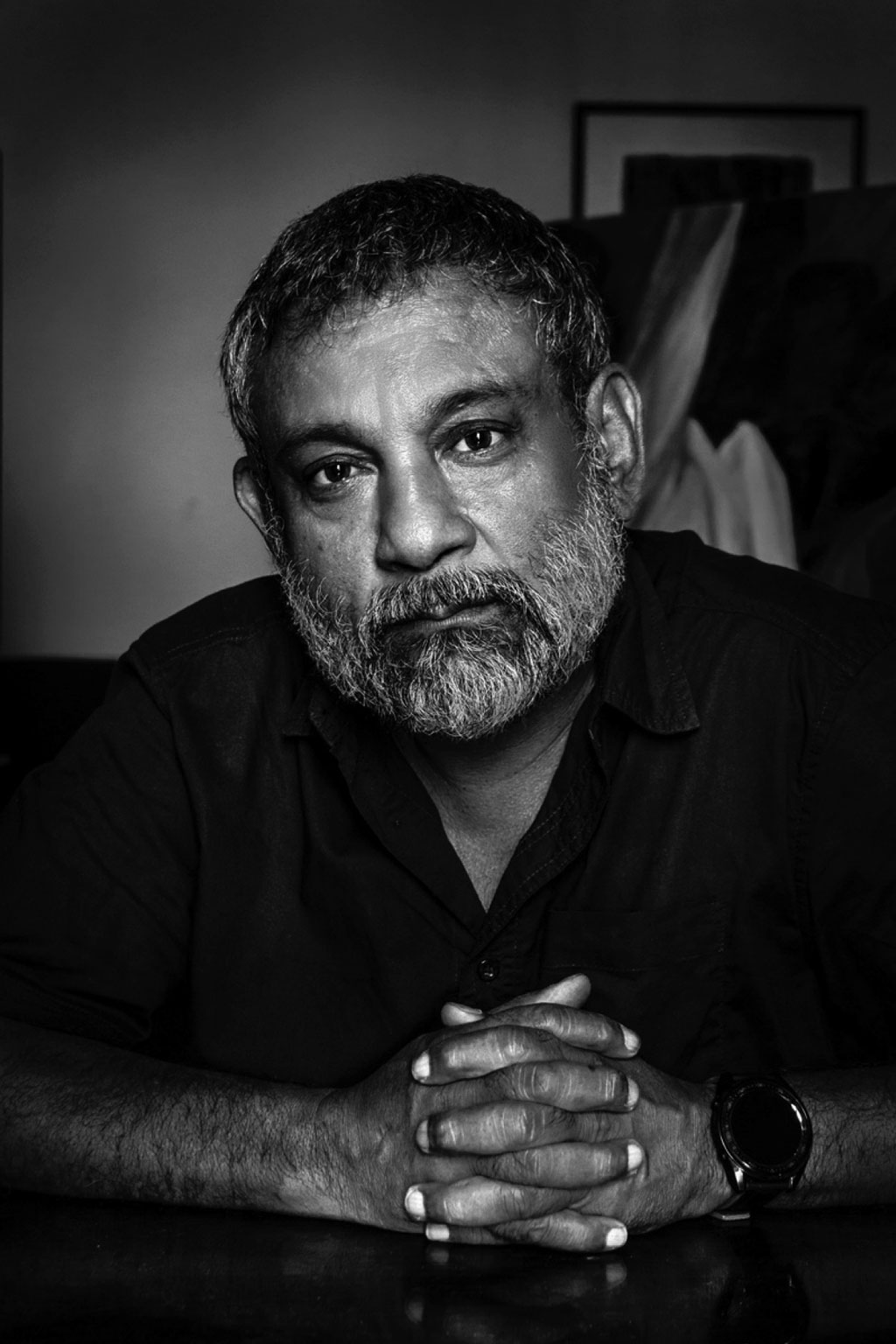 Pablo Bartholomew is a self-taught photographer with a practice of nearly five decades. Excavating his vast photographic archive, he created iconic exhibitions like Outside In: A Tale of Three Cities (2007); Bombay: Chronicles of a Past Life (2011); and The Calcutta Diaries (2012). He has held over 30 solo exhibitions at galleries, museums, biennales and photo festivals. His work is part of prominent collections worldwide.

From 2005 working with his father’s archive of photographs and writings, in 2008, he co-conceived the book and exhibition A Critic’s Eye, photographs that captured the cultural ethos of his fathers’ time, portraying the camaraderie between the artists of his generation. Finally, in September 2012, he self-published Richard Bartholomew -The Art Critic, a 640-page selection of his father’s writing on modern Indian art that intimately chronicles the untold, insider story of the birth of Modern Indian Art, the 1950s to 1980s.

From 1983 to 2004, his photojournalistic work has featured in every major international publication and has won him the World Press Photo award, three-times.

In 2013 he was bestowed the Padma Shri by the President of India, and in 2014 he received the Chevalier de l’Ordre des Arts et des Lettres from the French government.

He is currently continuing his long-term project on the Indian émigrés, discovering his Burmese roots and expanding on the DNA-based cross-border project, which incorporates textiles and weaving between India, Bangladesh, and Burma.

Log drums were used for celebrating victory and taking of heads, feasts and funerals of gr men and at the time of solar and lunar eclipses. Each occasion with its own special rhythms beaten by men. This ceremony is being performed after a gap of 30 years. When the log drum arrived at its destination in the morung, it was smeared with the blood of animals sacrificed to appease it. At the ceremony in Lungwa, everything was done according to tradition till the drum reached its destination and was installed. Photo: Pablo Bartholomew/Netphotograph.com
A temporary morung (though the institution still exists in some form, the actual buildings t served as the dormitories have long ceased to exist) had been built for an important rite of the festival. The party of Yaong (Phom Naga) warriors would engage in mock battle with Chuchu (Ao Naga) warriors to try and capture their morung. In the past both sides carried out the ritual with serious intentions of emerging the winner, here the fighting is friendly and is still a stirring spectacle evoking great excitement among the watching villagers. The palm fringes at the back can be worn only after a successful head hunt.
Among the Thendu Nagas (Lower Konyaks) was the once powerful village of Shangnyu. Ang of this village stands against a configuration of megaliths symbolizing fertility in the background. Every time a human head was taken, the village erected a stone to commemorate its trophy. Head-hunting was banned by the British in the 1930’s but earlier, the American Baptist missionaries who converted many Naga tribes to Christianity, not only made head-hunting taboo but also all other aspects relating to animist beliefs. Some villagers still retain these beliefs and often hide the human skulls that their ancestors had taken.
This is one of the most spectacular headdresses amongst all the Naga tribes worn by the Tangkhuls of both India and Myanmar (Burma). Intermarriage still exists between the Northern Tangkhuls of Manipur in India and the Somra Nagas of Burma. The headdress is adorned with hornbill feathers, a brass dish and fringes of human hair. The jaw-piece is made of wood embedded with red and white seeds.
Today Christianity is an accepted and vital part of Naga ethnicity. The influence of wester culture: young flower girls of the Angami tribe, with flower baskets, sit at a wedding service in Khedi Baptist Church, Bara Basti, Kohima, the largest village in Nagaland.
The Naga youth are extremely fashion conscious adopting the worst of the western styles. kids imitate a rock band. Rock and Pop music is popular amongst the Naga Hill tribes and singing is used extensively in the churches that have choirs. 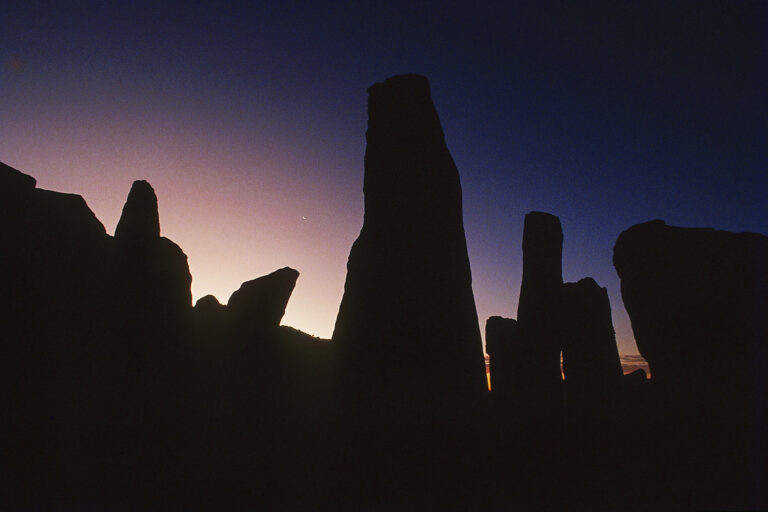 The Megalith group of stones in Willong village of the Maram Nagas... 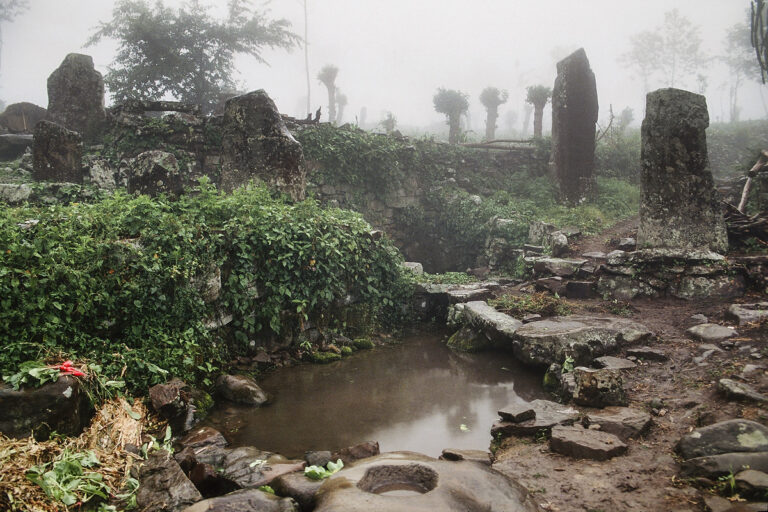 Often phallic in shape and erected as male and female, these stones... 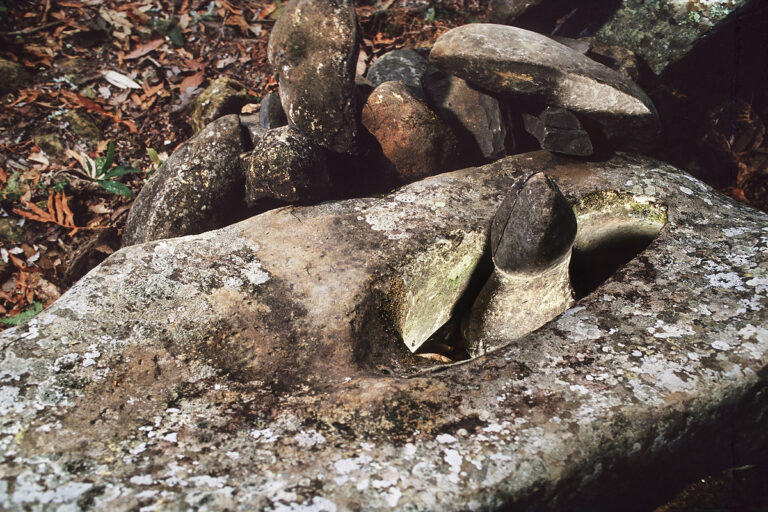 The male and female stone, a group of six megalith stones from... 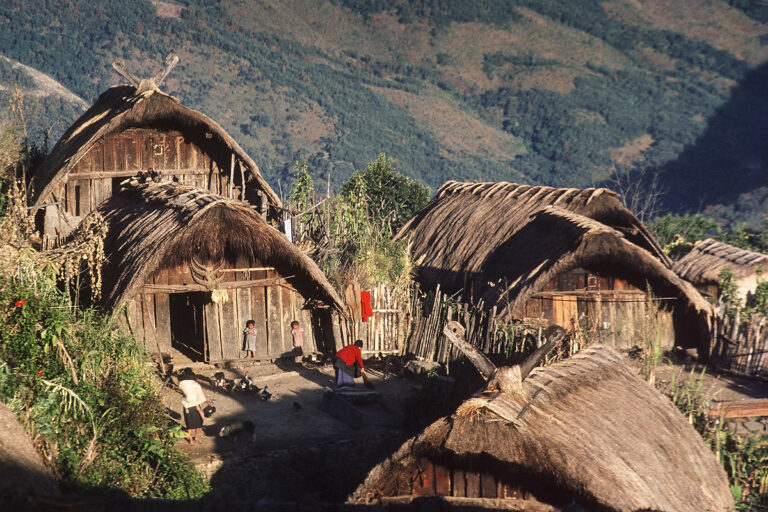 Willong has houses which are still intact – untouched by modern civilization.... 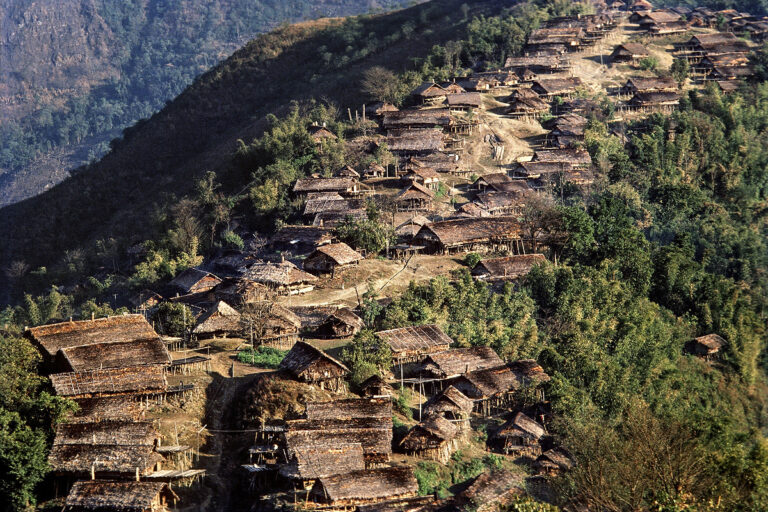 A fine example of untouched beauty before electric wires, lampposts, and tin... 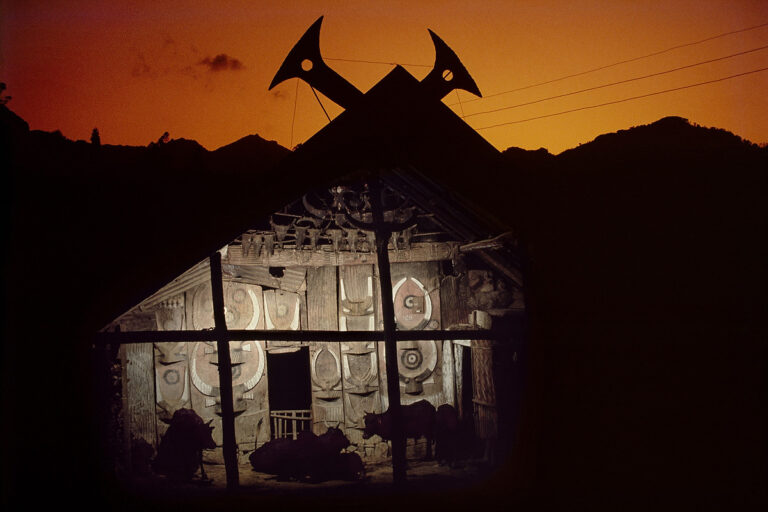 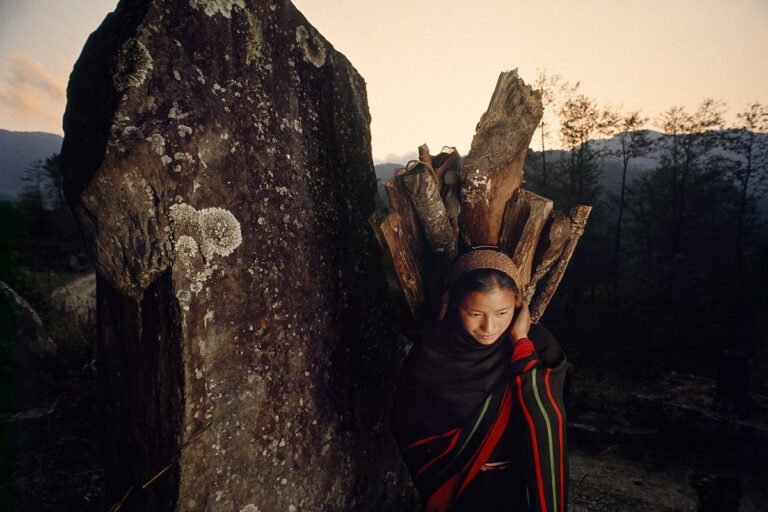 A village woman on her way back from the jungle after collecting... 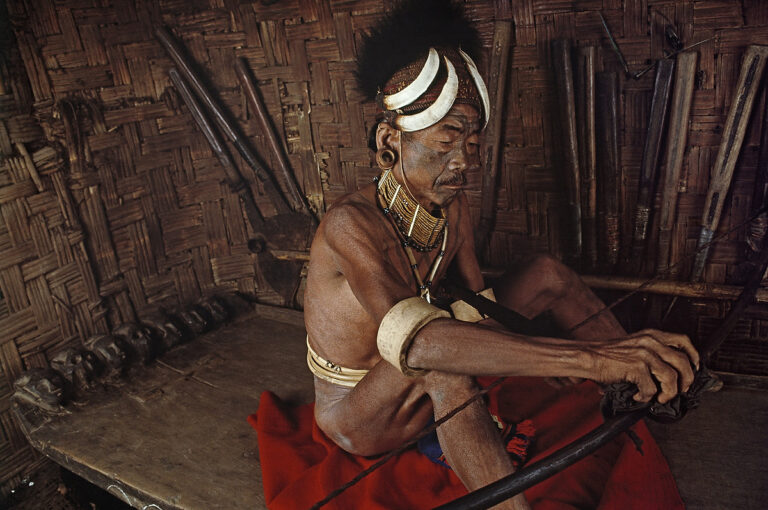 An old Konyak tribe warrior seated on his wooden bed looking at... 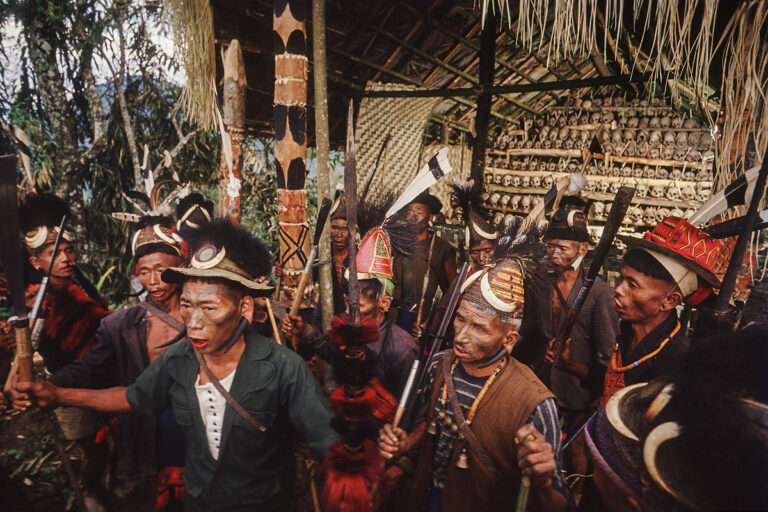 “Aoling” the annual spring festival of the Konyaks is celebrated in April... 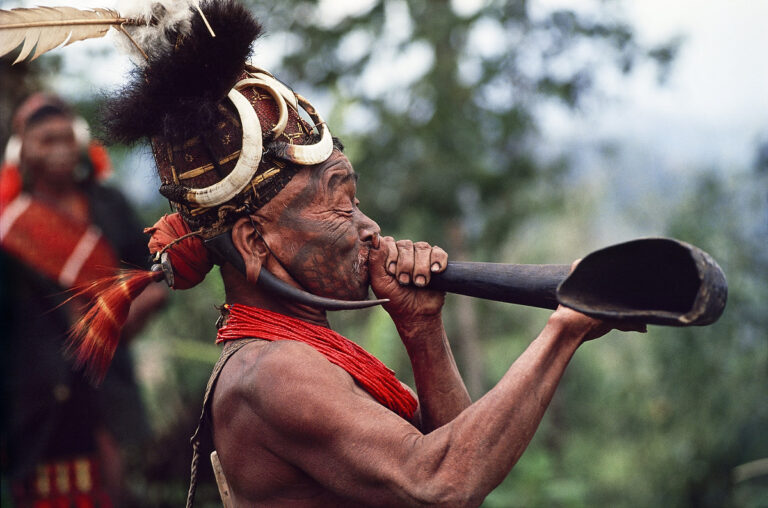 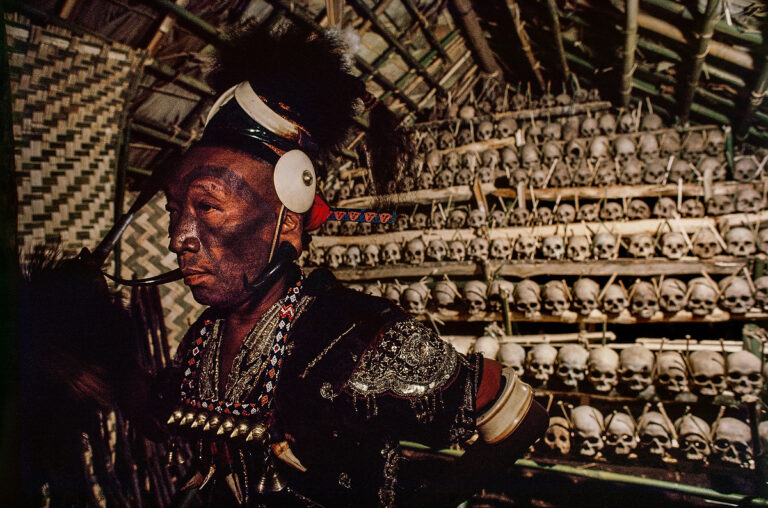 The powerful Ang of Shingachinyu in front of the skull hut situated... 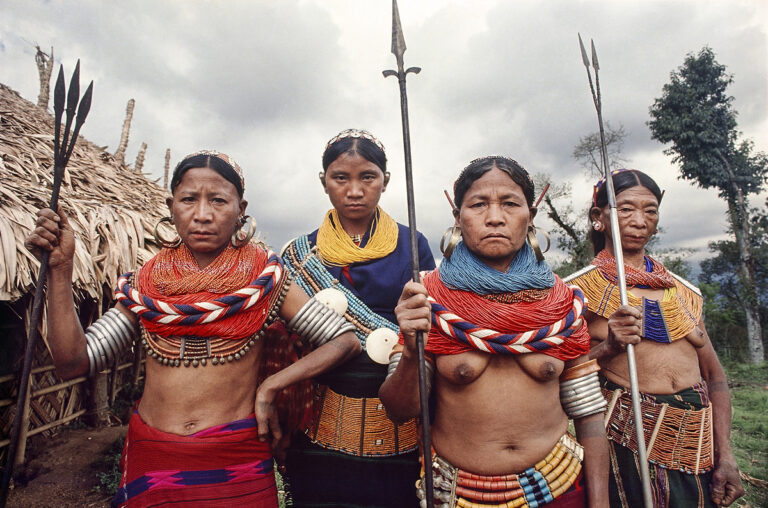 The two wives of the Ang of Shingachinyu with his main wife... 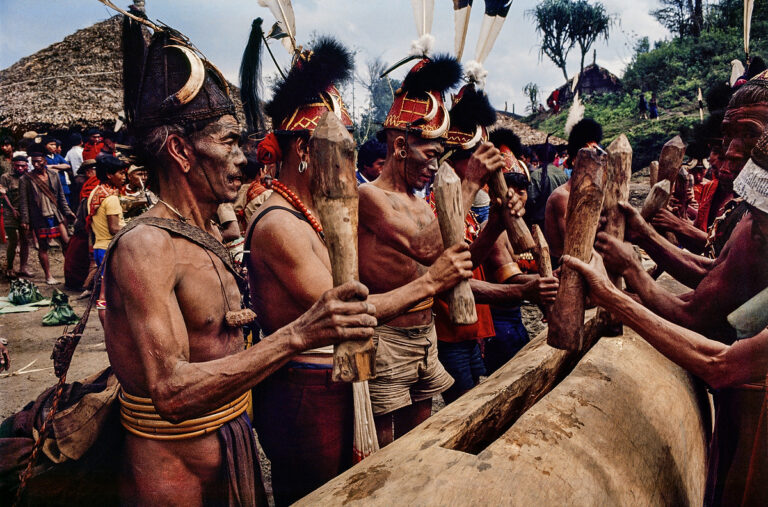 Villagers beat a log drum in a frenzy. In recent times the... 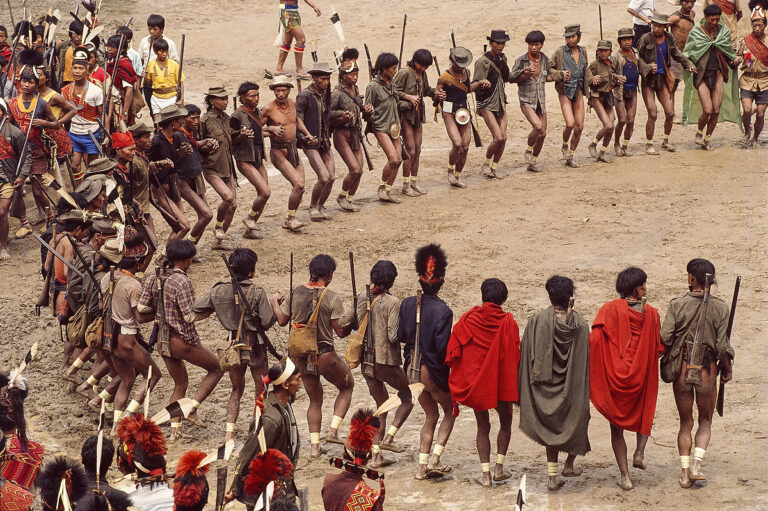 The log drum that is pulled from the jungle, after reaching their... 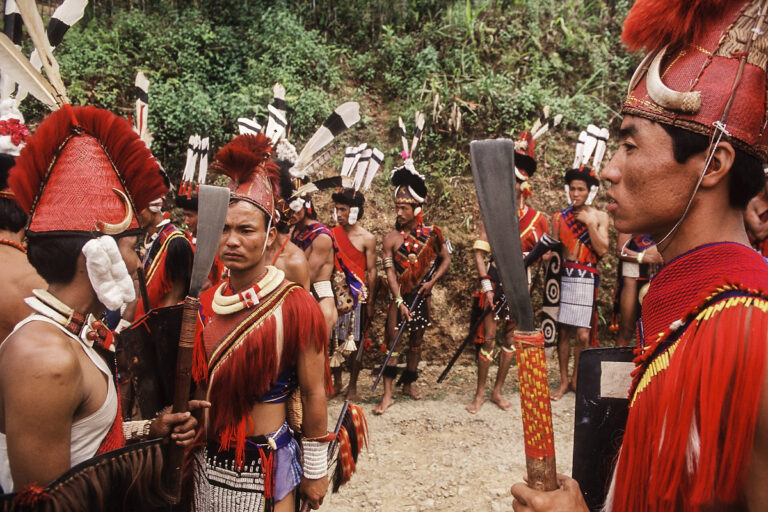 By registering yourself with us you authorize us to contact you via email/phone call, WhatsApp or SMS and provide you with the necessary support & services.